The Master and the Bull

There is an undeniable purity and magic about Sri Avinash that is like a magnet for all creatures. Be it the trees, the animals, the mountains or the moon, his love is always flowing forth in unstoppable waves of compassion. Even the most simple of actions, like going for a walk, are filled with wonder, awe and deep learning when in the presence of the Master.

One afternoon in early Autumn, Sri Avinash, our black kelpie dog Bhakti and I set off on a walk for some fresh air and exercise. These country roads meander around rolling green hills and criss-cross over rippling streams enlivened by recent rainfall. We ascended a crest along the road, taking pleasure in the sights of the valley below. Spontaneously, Sri Avinash infused the entire valley with divine peace energy. The pervading serenity could be felt and seen in the presence of the surrounding nature, and that was when I noticed the lone bull off in a distant paddock, far away from the rest of its herd.

Having walked this path many times, I’ve often stopped to admire this particular bull. He has such large hulking shoulders, he must be so strong. His black, velvet-like fur ripples over his muscular form and while the other cows tend to be cautious, he stands out as a solid and proud character, unflinching every time I have walked past.

As Sri Avinash and I continued our walk, it occured to me that it was unusual to see this particular bull so far away from the rest of the herd. He was slowly walking up the length of the far paddock’s fence, which was a couple of hundred metres or so in length, ambling over the undulating terrain towards the crossroads that we were walking towards also.

A fine mist had descended over the valley now, and low lying clouds hugged the mountain tops around us. As we got within twenty metres of the crossroads the bull let out three long, bellowing moans that echoed faintly around the valley.

“Something’s not right,” Sri Avinash remarked as we observed the bull. It was as if the bull had walked all that way to meet us and was now calling out “Master, help me!”

“He can sense my energy,” Sri Avinash quietly informed me, “that is why he is coming over.”

The bull stumbled several times as he made his way directly towards Sri Avinash, his head bobbing wearily with every fumbling step. It was clear that he was unwell and suffering.

Sri Avinash’s eyes filled with compassion and concern, himself letting out sighs of loving pity as the bull approached and then stopped a few meters from us.

“Look at his eyes,” Sri Avinash said, “he’s very sick, see how his eyes are not bright? They are cloudy like there is a film over them. Yes, this bull is not well.”

Without saying a word, Sri Avinash simply raised his hand.

In the silence that ensued, I watched as the bull’s laboured breathing began to ease. After a minute or so of receiving healing the bull came as close as possible to us, his nose almost touching the wire fence.

“Animals are very sensitive to energy,” Sri Avinash explained to me, “he knows that I can help him.”

Nobody moved, not even a breath of wind blew through the trees. Our energetic and ever active dog Bhakti did not even move a muscle. All was peaceful and still in the valley as Sri Avinash stood there, healing the bull.

Slowly, the bull’s breathing returned to a calm and relaxed rhythm. His head began to lift.

“See,” Sri Avinash whispered to me, never taking his eyes off the bull, “he is loving this energy, he can feel it, see how his eyes are looking brighter now?”

And they were. The bull’s whole energy was shifting, he was standing taller and holding his head up without signs of weariness. It didn’t take long before the bull looked quite healthy again.

“Look at his stance,” Sri Avinash instructed me, “can you see how there’s so much more presence in him now, look at his eyes—they’re looking so much brighter.” Sri Avinash put his hand down and looked lovingly at the bull, sending his prayers and wishes.

As we made our way home over the hill we glanced back every now and then. The bull did look so much better, even from afar we could tell. He was standing strong and tall again in that far paddock—a completely different sight to the one we encountered earlier.

A couple of days later I walked down to see how the bull was doing. He was in the centre of the herd again, happily munching away on grass without stopping to look up at me, bright-eyed and not a hint of sickness energy about him.

Watching the Master in action as he moves through the world, lovingly healing and uplifting all of God’s creations that come before him is such a privilege, inspiration and pleasure to behold. To witness his intuition and insight is phenomenal. How will I ever be able to express to you what a joy it is to walk through this journey called life at the Master’s side? 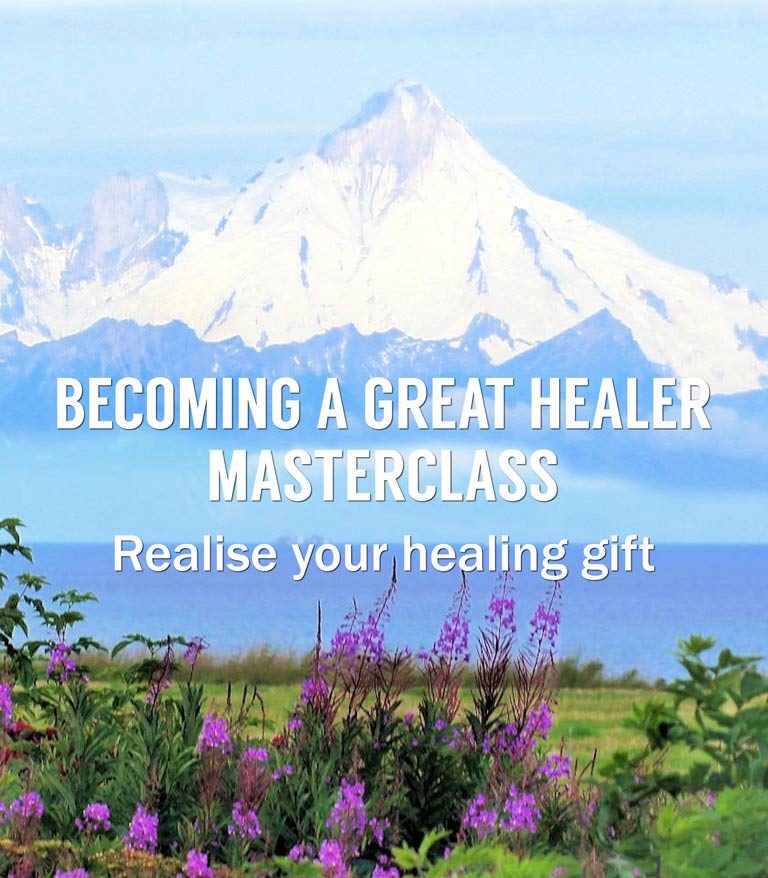 In this Masterclass Sri Avinash shares his unique and life-changing healing method, and transmit infusions of Divine energies to awaken the innate ancient healer in you.

If you have ever thought of becoming a healer or if you are already a healer, this Masterclass is essential training to learn how to heal the world, your loved ones or yourself.